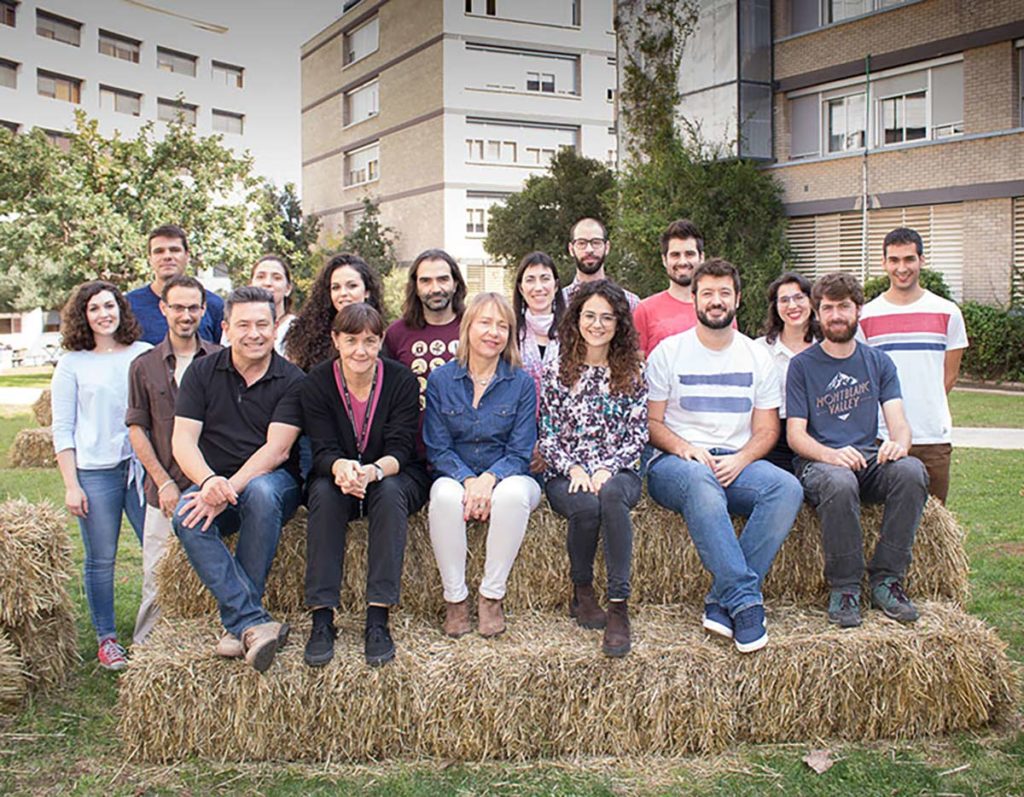 The subependymal zone (SEZ) niche of the adult mammalian brain contains discrete populations of neural stem cells (NSCs) which remain undifferentiated and transit between different states of quiescence/activation while continually generating new neurons. The study and knowledge of the NSC biology and regulation may provide knowledge on the role of stem cells in homeostasis, aging and cancer as well as essential tools for an eventual manipulation of endogenous NSCs for tissue repair upon disease or injury. Our laboratory explores different aspects of NSC biology, especially those that underlie self-renewal.

The perfect balance between stemness and differentiation is accomplished by regulating long-term self-renewal, which is the primary trait that sets adult stem cells (SCs) apart from their more differentiated progeny. While SC fate may be determined by SC division mode, many SCs achieve long-term self-renewal by experiencing prolonged periods of quiescence. Cellular quiescence refers to a reversible state in which cells have exited the cell cycle (G0) but can re-enter either stochastically or in response to stimuli. Quiescent cells are transcriptionally and metabolically less active than actively proliferating SCs or more committed progenitors, but they are hardly dormant. Instead, quiescent SCs have several mechanisms in place that allow for rapid cell cycle re-entry, i.e. they are poised for activation and differentiation. Although quiescence is not an essential SC feature, dysregulation and loss of quiescence often results in imbalances that eventually deplete the SC pool. Thus, understanding how the ‘quiescence cycle’ (i.e., entry, maintenance and exit) is controlled remains an essential question for the near future.

Unveiling the depths of NSC heterogeneity has become one of the biggest challenges in the neurogenic field. It has not been possible for many years to use a single marker to specifically discriminate bona fide NSCs from niche astrocytes, much less NSCs with different proliferation dynamics. Fluorescence activated cell sorting (FACS) strategies and RNA-seq analyses have provided novel insights into the molecular identity of NSCs and their different states of activation. NSCs co-exist in two main proliferative states, activated (aNSCs) and quiescent (qNSCs) that differ transcriptionally and phenotypically. Several studies in SC niches have also demonstrated the existence of SCs in different levels of quiescence depth. MuSCs, HSCs and NSCs show quiescence heterogeneity where quiescent cells in relatively ‘shallow quiescence’, termed ‘GAlert’ or ‘primed’ SCs, can re-enter the cell cycle faster than more ‘deeply quiescent’ cells. We have designed strategies for the prospective isolation of NSCs in different states of activation from the adult SEZ, including primed NSCs (pNSCs).

One of the most intriguing questions in the SC quiescence field is whether quiescence is a progressively acquired competence or a distinct identity resulting from asymmetric cell division. Since qNSCs do not divide, it seems reasonable to assume that they transition into activation by tuning specific expression programs before entering the cell cycle. Indeed, single-cell studies display a continuous progression of cells that ultimately can be clustered into discrete populations. On the other hand, recent experiments have demonstrated that proliferating aNSCs can exit the cell cycle and acquire a quiescent molecular signature, although there is no much evidence that explains how this ‘return’ to quiescence is accomplished. Our laboratory has recently uncovered that TNF-alpha activates pNSC with low levels of EGFR through its receptor TNFR2, whereas it promotes a return to quiescence through TNFR1 signaling in inflammatory conditions, thus introducing a new regulator into the quiescence cycle. With our new approaches, we aim at identifying new niche signals and intrinsic mechanisms that regulate the transit of adult NSCs from quiescence to activation and back. Additional goals are to fate map the contribution of different NSC states to neurogenesis and to identify novel specific markers for these cell states. We also work to elucidate the regulation of the symmetric/asymmetric division of NSCs as one of the crucial mechanisms that ensures their self-renewal while maintaining the constant generation of differentiated progeny.

The SEZ is the largest germinal region in the adult rodent brain producing millions of neurons that migrate towards the olfactory bulb during the lifespan. In this neurogenic region, NSCs reside in the walls of the lateral ventricles in a highly specialized microenvironment known as ‘neurogenic niche’. NSCs receive multiple cellular and molecular extrinsic cues from their niche that tightly control their quiescence-activation state and neurogenic potential. This finely tuned cellular ecosystem displays a specific cytoarchitecture and a complex network of molecular and cellular components that actively participate in NSC maintenance and regulation.

The main focus in this line of research is the study of the interplay between intrinsic and extrinsic signals that influence NSC behavior, paying special attention to the understanding of different niche-derived cues that control the dynamic transitions among quiescent, primed-for-activation and activated NSC states.

Different cellular components in the SEZ co-exist with NSCs, being essential for their maintenance and regulation. Among the different elements in the niche, we have specially focused on the regulation mediated by vasculature, microglia and neuronal innervation. Indeed, NSCs have a unique disposition and interaction with other cell constituents, especially vasculature. NSCs are localized around blood vessels, which renders them susceptible both to soluble (locally secreted and blood-borne) and to adhesion-related (cell-cell and cell-ECM) cues. Our laboratory identified the first angiocrine factor described to be involved in NSC regulation, the epithelium-derived growth factor (PEDF). Furthermore, we also reported the role of vascular secreted neurotrophin-3 (NT-3) in the maintenance of NSC quiescence. Regarding innervation, we reported an essential role for the protein α-synuclein, present in dopaminergic nigral afferents, in the regulation of adult NSCs, identifying the first synaptic regulator with an implication in the SC niche biology. More recently, we have characterized the response of NSCs to systemic inflammation, a reflection of the emerging concept of homeostatic response of SCs to remote injuries.

We are currently focusing on additional cues, which include:

Neuroimmune interactions: There is growing evidence that the immune system participates in the maintenance of the brain homeostasis and function, and that also has a role in regulating adult neurogenesis. This has expanded the concept of niche, evidencing its integration in the homeostasis of the whole organism. In this way, we have recently identified the role of peripherally-induced inflammation in regulating NSC activation state though TNF-α receptors 1 and 2 and are currently exploring other interactions between NSCs and the immune system. Primary glioblastoma is the most aggressive and medically hopeless form of brain tumor, and increasing evidence shows that NSCs from the SEZ are its cells-of-origin. However, for these cells to become tumorigenic, they have to acquire mutations and evade the immune system. Moreover, most interactions between the immune system and the brain, which are now known to exist, are largely unexplored. Therefore, we want to study whether these NSCs need to actively hide from immunity or their location within the brain protects them and if these interactions are different depending on the activation state of the cells.

Metabolic control of NSC status: Metabolism is a set of reactions that allows cells to obtain and manage energy necessary for cell survival. We are interested in knowing whether metabolism is an intrinsic factor, modulated by the niche, that needs to be contextualized in the quiescence-to-activation transition of NSCs.  A metabolic rewiring during these transitions is associated with a downregulation of glycolysis and lipid oxidation, in favour of a major dependence on phosphorylative oxidation. In this context, our aim is trying to uncover how metabolism is coupled with the maintenance of NSC quiescence. Moreover, understanding the influence of niche in the definition of NSC metabolism is also an important factor to take into consideration.

Vascular regulation of NSCs: NSCs physically interact with the specialized highly permeable SEZ vascular plexus constituting the so called “neurovascular unit”. These interactions render them susceptible to both soluble (locally secreted and blood-borne) and to adhesion-related (cell-cell and cell-ECM) cues. Our laboratory has been a pioneer in the study of angiocrine factors. Regarding vascular adhesion-mediated pathways, although a few molecules have been shown to have a role in NSC quiescence maintenance (integrins, Notch, Eph:Ephrin), during the last years, little advance has been made in this context. This may be explained, in part, by the lack of well-defined markers to distinguish the different NSC populations and the complexity of the methodologies that enable the study of vascular adhesion. In this context, we have developed a strategy that allows us to evaluate direct binding of NSCs, especially qNSCs, to vasculature. This, together with our methodologies to study the different NSC populations regarding their state of activation, will allow us to directly target the question of how NSC interact with the vascular niche, what are the molecular regulators involved in this process, and the role of vascular adhesion in the quiescence-to-activation transition.