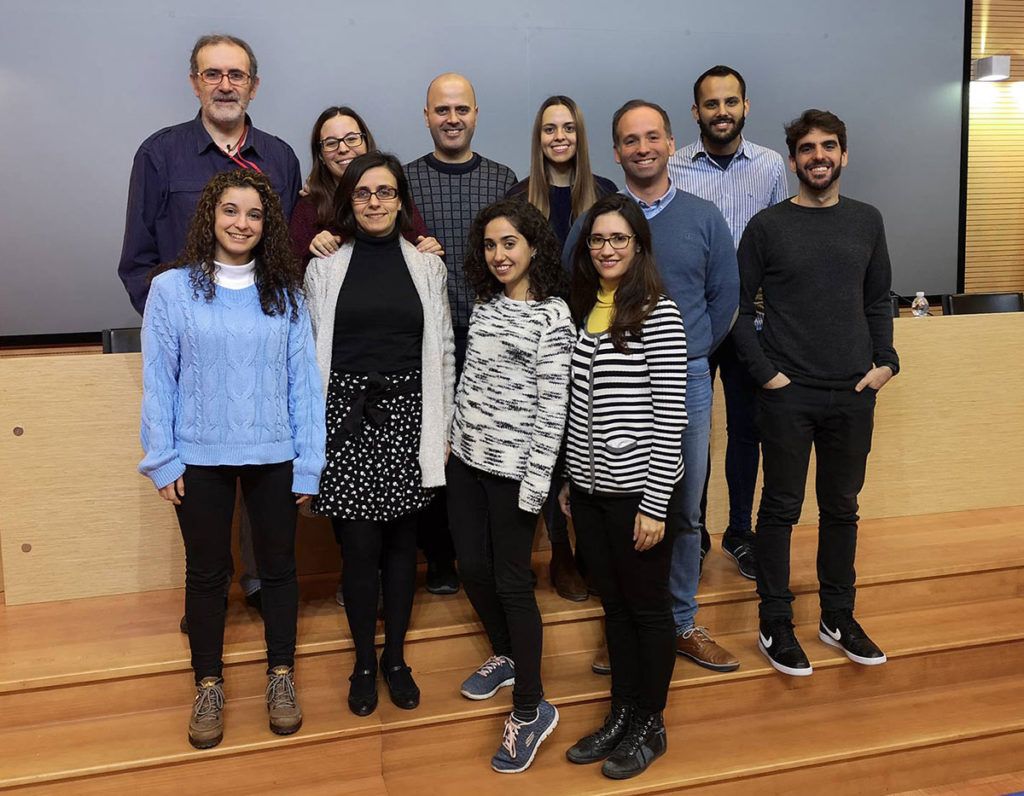 The research lines in this laboratory are:

Specifically, we are focused on new genes able to induce cellular immortalization identifying that most of these genes were able to provoke de-differentiation to cancer stem cells. In this regard, our laboratory have published recently on

Colorectal cancer is the second most common cancer in women and the third most common in men worldwide. However, despite current progress, many patients with advanced and metastatic tumors still die from the malignancy. Refractory disease often relies on nicotinamide adenine dinucleotide (NAD)-dependent mechanisms. NAD metabolism and a stable NAD regeneration circuit are required to maintain tissue homeostasis and metabolism. However, high levels of NAD confer therapy resistance to tumors. NAMPT, the rate-limiting enzyme responsible for the highest source of physiologic NAD biosynthesis, increases tumorigenic properties and induces cancer stem cell-like properties through pathways that control stem cell signaling, thus enriching the cancer-initiating cell (CIC) population. Furthermore, NAMPT expression correlated with high levels of CIC-like cells in colon tumors directly extracted from patients, and transcription meta-analysis revealed that NAMPT is also a key factor that induces cancer stem pathways in colorectal cancer tumors. This effect is mediated by PARP and SIRT1. In addition, we report a novel NAMPT-driven signature that stratifies prognosis from high to low expression groups. The NAMPT signature contained SIRT1 and PARP1 levels as well as other cancer stem cell-related genes. Finally, NAMPT inhibition increased the sensitivity to apoptosis in both NAMPT-expressing cells and tumorspheres.Conclusions: NAMPT represents a novel therapeutic target in colon cancer progression and relapse, particularly the CIC subset of human colon cancers.

Purpose: Cancer stem cells (CSC) are self-renewing tumor cells, with the ability to generate diverse differentiated tumor cell subpopulations. They differ from normal stem cells in the deregulation of the mechanisms that normally control stem cell physiology. CSCs are the origin of metastasis and highly resistant to therapy. Therefore, the understanding of the CSC origin and deregulated pathways is important for tumor control.Experimental Design: We have included experiments in vitro, in cell lines and tumors of different origins. We have used patient-derived xenografts (PDX) and public transcriptomic databases of human tumors.Results: MAP17 (PDZKIP1), a small cargo protein overexpressed in tumors, interacts with NUMB through the PDZ-binding domain activating the Notch pathway, leading to an increase in stem cell factors and cancer-initiating-like cells. Identical behavior was mimicked by inhibiting NUMB. Conversely, MAP17 downregulation in a tumor cell line constitutively expressing this gene led to Notch pathway inactivation and a marked reduction of stemness. In PDX models, MAP17 levels directly correlated with tumorsphere formation capability. Finally, in human colon, breast, or lung there is a strong correlation of MAP17 expression with a signature of Notch and stem cell genes.Conclusions: MAP17 overexpression activates Notch pathway by sequestering NUMB. High levels of MAP17 correlated with tumorsphere formation and Notch and Stem gene transcription. Its direct modification causes direct alteration of tumorsphere number and Notch and Stem pathway transcription. This defines a new mechanism of Notch pathway activation and Stem cell pool increase that may be active in a large percentage of tumors.

Inflammation is a complex defensive response activated after various harmful stimuli allowing the clearance of damaged cells and initiating healing and regenerative processes. Chronic, or pathological, inflammation is also one of the causes of neoplastic transformation and cancer development. MAP17 is a cargo protein that transports membrane proteins from the endoplasmic reticulum. Therefore, its overexpression may be linked to an excess of membrane proteins that may be recognized as an unwanted signal, triggering local inflammation. Therefore, we analyzed whether its overexpression is related to an inflammatory phenotype. In this work, we found a correlation between MAP17 expression and inflammatory phenotype in tumors and in other inflammatory diseases such as Crohn’s disease, Barrett’s esophagus, COPD or psoriasis. MAP17 expression correlated also with the markers of inflammation HLAs, BBS10, HERC2, ADNP and PYCARD. Furthermore, we found that MAP17 expression directly regulates NFAT2 and IL-6 activation, inducing the differentiation of monocytes to dendritic cells and suggesting a causal role of MAP17 in inflammation. Immunohistochemistry confirms local inflammation, mainly CD45+ cells, at the site of expression of MAP17, at least in tumors, Crohn’s and psoriasis. Therefore, our data indicates that the overexpression of the protein MAP17 plays important role in diseases involving chronic inflammation.

The PIM family of Ser/Thr kinase proteins has been implicated in tumorigenesis at different levels. PIM proteins are overexpressed in several tumor types and have been associated with chemoresistance. However, their role in hormone-dependent female tissues has not been explored, especially in the uterus, breast and ovary. We generated conditional transgenic mice with confined expression of human PIM1 or PIM2 genes in these tissues. We characterized the tumoral response to these genetic alterations corroborating their role as oncogenes since they induce hyperproliferation in all tissues and tumors in mammary gland and uterus. Furthermore, we observed a high degree of inflammatory infiltration in these tissues of transgenic mice accompanied by NFAT and mTOR activation and IL6 expression. Moreover, PIM1/2 were overexpressed in human breast, uterine and ovarian tumors, correlating with inflammatory features and stem cell markers. Our data suggest that PIM1/2 kinase overexpression provoke tissue alterations and a large IL6-dependent inflammatory response that may act synergistically during the process of tumorigenesis. The possible end-point is an increased percentage of cancer stem cells, which may be partly responsible for the therapy resistance found in tumors overexpressing PIM kinases.

The MYB binding protein 1A (MYBBP1A, also known as p160) acts as a co-repressor of multiple transcription factors involved in many physiological processes. Therefore, MYBBP1A acts as a tumor suppressor in multiple aspects related to cell physiology, most of them very relevant for tumorigenesis. We explored the different roles of MYBBP1A in different aspects of cancer, such as mitosis, cellular senescence, epigenetic regulation, cell cycle, metabolism plasticity and stemness. We especially reviewed the relationships between MYBBP1A, the inhibitory role it plays by binding and inactivating c-MYB and its regulation of PGC-1α, leading to an increase in the stemness and the tumor stem cell population. In addition, MYBBP1A causes the activation of PGC-1α directly and indirectly through c-MYB, inducing the metabolic change from glycolysis to oxidative phosphorylation (OXPHOS). Therefore, the combination of these two effects caused by the decreased expression of MYBBP1A provides a selective advantage to tumor cells. Interestingly, this only occurs in cells lacking pVHL. Finally, the loss of MYBBP1A occurs in 8%-9% of renal tumors. tumors, and this subpopulation could be studied as a possible target of therapies using inhibitors of mitochondrial respiration.

Ovarian cancer is the leading cause of gynecologic cancer-related death, due in part to a late diagnosis and a high rate of recurrence. Primary and acquired platinum resistance is related to a low response probability to subsequent lines of treatment and to a poor survival. Therefore, a comprehensive understanding of the mechanisms that drive platinum resistance is urgently needed. Using bioinformatics analysis, we identified transcriptional targets that are common endpoints of genetic alterations linked to platinum resistance in ovarian tumors. Most of these genes are grouped into 4 main clusters related to the CSC phenotype, including the DNA damage, Notch and C-KIT/MAPK/MEK pathways. The relative expression of these genes, either alone or in combination, is related to prognosis and provide a connection between platinum resistance and the CSC phenotype. However, the expression of the CSC-related markers was heterogeneous in the resistant tumors, most likely because there were different CSC pools. Furthermore, our in vitro results showed that the inhibition of the CSC-related targets lying at the intersection of the DNA damage, Notch and C-KIT/MAPK/MEK pathways sensitize CSC-enriched tumorspheres to platinum therapies, suggesting a new option for the treatment of patients with platinum-resistant ovarian cancer. The current study presents a new approach to target the physiology of resistant ovarian tumor cells through the identification of core biomarkers. We hypothesize that the identified mutations confer platinum resistance by converging to activate a few pathways and to induce the expression of a few common, measurable and targetable essential genes. These pathways include the DNA damage, Notch and C-KIT/MAPK/MEK pathways. Finally, the combined inhibition of one of these pathways with platinum treatment increases the sensitivity of CSC-enriched tumorspheres to low doses of platinum, suggesting a new treatment for ovarian cancer.

· Downregulation of MYPT1 increases tumor resistance in ovarian cancer by targeting the Hippo pathway and increasing the stemness.

Ovarian cancer is one of the most common and malignant cancers, partly due to its late diagnosis and high recurrence. Chemotherapy resistance has been linked to poor prognosis and is believed to be linked to the cancer stem cell (CSC) pool. Therefore, elucidating the molecular mechanisms mediating therapy resistance is essential to finding new targets for therapy-resistant tumors. MYPT1 (PPP1R12A), encoding myosin phosphatase target subunit 1, is downregulated in ovarian tumors, leading to reduced survival and increased tumorigenesis, as well as resistance to platinum-based therapy. Similarly, overexpression of miR-30b targeting MYPT1 results in enhanced CSC-like properties in ovarian tumor cells and is connected to the activation of the Hippo pathway. Inhibition of the Hippo pathway transcriptional co-activator YAP suppresses the resistance to platinum-based therapy induced by either low MYPT1 expression or miR-30b overexpression, both in vitro and in vivo. Our work provides a functional link between the resistance to chemotherapy in ovarian tumors and the increase in the CSC pool that results from the activation of the Hippo pathway target genes upon MYPT1 downregulation. Combination therapy with cisplatin and YAP inhibitors suppresses MYPT1-induced resistance, demonstrating the possibility of using this treatment in patients with low MYPT1 expression, who are likely to be resistant to platinum-based therapy.